Thank You and Happy Couponing

Thank you for visiting my website and for your purchases of my clipping services. I have leaving my site up just because it does have good information regarding how to coupon. However, I will no longer be taking orders for my clipping services as God is moving me into new directions. I wish y'all the best!

Just 10 Things About Me - The Foodie Collection

1. I am a bit of a closet foodie. I like all those chef competition shows from Top Chef to Chopped to Worst Cooks in America.
.

2. I can't help to giggle watching the original Iron Chef shows from Japan. The bad dub job into English reminds of watching those old Godzilla movies on tv when I was a kid. They even use the sound effects like you'd hear on the power rangers!
.
3. I wouldn't want to judge any of those shows however especially Iron Chef. The one where someone made squid ice cream which was this horrid gray color really made me squeamish.
.
4. I wish more recipes were featured on the shows when the big star celebrity chefs have to use such items as canned green beans, frosted flakes and a jar of peanut butter. I actually have on hand canned green beans, frosted flakes and peanut butter! I don't have and have never been able to afford proscuito.
.

5. My celebrity chef crush would have to be Michael Symon. The dude is like a rock star when it comes to celebrity chefs. I love his laugh and we both share a common bond... a certain fondness for... 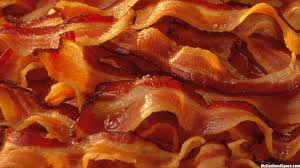 Symon even has a tattoo that says, "Got Pork?" What's not to love?
.

6. My cooking style more resembles Paula Deen. Homestyle cooking all the way! Mmmmmmm, real butter! I wish I cooked more like Elizabeth Faukner. Talk about a serious threat in the kitchen. She can do it all! How she missed being an Iron Chef, I just don't understand!
.

7. I can't understand why the contestants on Hell's Kitchen never know how to cook risotto, beef wellington or scallops. Have they not watched this show before they applied? Every season chefs on that show must be able to cook those items and yet, there are always a handful that can never make those dishes!
.

8. The next time I am in Los Angeles, I want to go to The Foundry and get Chef Greenspan's Grilled Cheese Sandwich, if I can afford it. It is supposedly the best grilled cheese sandwich ever and it's on raisin bread!
.

9. At Christmas time, I love to bake for my family, friends and neighbors. I turn into some sort of weird, whacked out hippie chic version of Betty Crocker just after Thanksgiving. I make so many goodies that by January 1, I don't want to see any more fudge until November!
.

10. One of my favorite ingrediants is Sriracha Sauce! (Also known by many as "Rooster Sauce.") My son and I discovered this spicy Asian sauce while trying to figure out the recipe for Applebees' Dynamite Shrimp Sauce! The secret ingrediant was Sriracha Sauce!

Just 10 Things About Who I Am

1. I am a Christian. Now this doesn't mean I am perfect! Au Contraire'! It merely means I am saved. I screw up a lot but I can always go to God to be forgiven. It's not a Get Out of Hell Free card mind you but with my heart in the right place, God can forgive me of almost anything!

2. My name is Corrie. Supposedly it means "Chosen One" unless you are Dutch. In Dutch, it means ravine which explains why I can be such a ditch.

3. I have an offbeat sense of humor! Hang around long enough and you'll see it in me.

4. I have ecclectic musical tastes. I like really passionate music with lots of texture to it.

5. I do not consider myself an extreme couponer but a serious couponer. That's not to say that I don't get some extreme deals from time to time but my average weekly shopping trip usually produces between 50%-65% savings.

6. I enjoy weird art. That's not to say that some painting of water lillies isn't all that but I like strange stuff like the guy who can make peanut butter and jelly sandwiches into a portrait of the Virgin Mary or the guy who tapes garbage bags together and places them near subway grates so when the trains go by underground, the airflow animates the garbage bags into really cool sculptures of various animals and beasts. I get a kick out kinetic art.

7. I am the single mom of a special needs young man who has taught me more than I could ever teach him.

8. I am not a stereotypical Texan. I do not currently own a pair of cowboy boots or a cowboy hat. The only time I have ever ridden a horse has been on a visit to Canada. I am more of a hippie chick desert rat since I was born in Arizona.

9. I have a passion for photography. However, the digital world of photography is not one I have done much venturing. I still have an old Pentax K-1000 that is such a workhorse!

10. I am a reformed adrenaline junkie who has gone bungee jumping, rapelling and been covered in bees.